On November 16, 2017, I was officially sworn into office by Speaker Carl Heastie, the first State Assembly Speaker of Color. I would like to take a moment to express my profound gratitude for the privilege to serve this community and granting me the honor of a lifetime to represent you in Albany. As the Chief of Staff of former Assemblyman Herman D. Farrell, I have devoted my life to serving constituents. Now as the new Assemblyman, I look forward to this phase of my service.

Report to Community Board 10

Since being sworn in, my staff and I are diligently getting up to speed with issues of concern here in the District and in Albany to prepare for the upcoming Legislative Session, which begins next month. This week, I joined my fellow Members to discuss the caucus agenda and review the prospective legislation we hope to accomplish on behalf of the people we are entrusted to serve.

Standing Up Against Gun Violence in the Community
Pushing back against gun violence in our neighborhoods has long been a personal mission of mine. I consider the recent shootings in and near our community as tragic events and nothing short of unacceptable. I have been working with advocates such as Street Corner Resources, representatives of the New York City Police Department and other stakeholders throughout the community to do what I can to be helpful in their efforts to stop gun crimes like these.
Taylor and Staff Preparing for 2018 Legislative Session
I am working with community leaders and activists to discuss their concerns and support their efforts both in the District and in Albany. In addition, I have met with Speaker Heastie's counsel to determine which Legislative Committees I will serve on. It is my hope that I will be your voice in Albany on the issues of affordable housing, education and transportation as I believe these issues to be the most important concerns in our district.
Listening Tour and Town Hall Meetings to be Held in January 2018
Town Hall Meetings will be organized throughout the District in January 2018 to keep my staff and me in touch with your concerns. Through these meetings, I am an active listener wishing to inform my fellow members of the Assembly's Majority Conference about our community's needs and wants. Details of these meetings are on page 2 of this report.
NYCHA Admits Lead an Issue, Will Create New Monitoring Program
On December 5, New York City Housing Authority Chair and CEO Shola Olatoye appeared before the City Council to testify on the lead exposure of children residing in NYCHA housing. Lead exposure can result in lifelong health complications, especially for children.

Hours before her testimony to the Council, Chair Olatoye went on New York 1 for an interview and admitted that NYCHA has not lived up to its responsibility to protect the 1 in 14 New Yorkers who live in NYCHA housing from lead exposure. According to her statements during this interview, Chair Olatoye pledged to better the efforts in inspecting every NYCHA apartment occupied by a child aged six or younger as well as creating a new compliance program.

While I appreciate this public response from the Chair, we will be watching closely to ensure that NYCHA lives up to the commitment. The doors of my District Office are and will always be open to the constituents of my District who believe they are not being appropriately served and protected.

Taylor Working to Help the Community
Below left, Council Member Mark Levine and Assembly Member Taylor join efforts to support victims of a November 2017 fire that left dozens of families displaced from their homes. Below right, Assembly Member Taylor speaks during a recent New York Council for Housing Development Funding Corporation meeting, hosted by Senator Brian A. Benjamin, to discuss how to address the dire need for affordable, low-income housing. 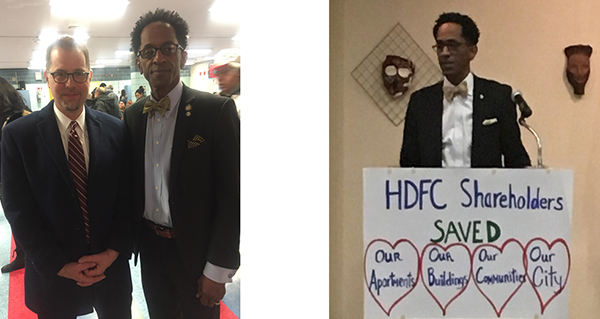