Governor Cuomo's 2018 agenda promises a progressive government by advancing a slate of critical social and economic policies to improve the lives of New Yorkers. He has unveiled the FY 2019 Executive Budget, which continues the state's efforts to deliver on the promise of progressive government by protecting taxpayers against devastating federal action, strengthening the middle class, cutting taxes and making smart investments in New York's future. Some key highlights of the report are:

I commend Governor Cuomo for starting us down on this much-needed path, and will continue to work towards a day where his proposition becomes the law. New York will continue to lead the way in 2018, encouraging our shared values of opportunity, equality, fairness, and hope, and proving the competency of our progressive government.

Taylor Appointed Chair to the Subcommittee on Regulated Mortgage

Speaker Heastie has appointed me as Chair to the Subcommittee on Regulated Mortgage Lenders on January 10th, 2018. Furthermore, I will also be holding hearings to better understand the disparities in lending practices in the wake of the last economic crisis. I am working with community leaders and activists to discuss their concerns and support their efforts both in the District and in Albany. It is my hope that I will be your voice in Albany on the issues of affordable housing, education and transportation, as I believe these issues to be the most important concerns in our district.

Assemblymember Taylor helped pass the New York State Development, Relief and Education for Alien Minors (DREAM) Act to expand access to higher education for the children of immigrants (A.9605-A). "This legislation will help more hardworking students earn a college degree, begin successful careers and give back to their communities" Taylor said.

"Children should not be punished because their parents brought them here in search of a better life, making sacrifices and experiencing hardships many of us couldn't even imagine. Let me be clear, these are children who know no other home and we are proud to have them here. We will not turn our backs on them. We will not push them into the shadows. To all 'Dreamers': You are New Yorkers, you are valued and you are worthy."

Taylor announced that legislation he helped pass, known as Lavern's Law, will be signed into law by the Governor. This new law will give patients whose cancer was misdiagnosed or not detected more time to pursue just compensation in a court of law (A.9633-A). "Misdiagnosing or failing to diagnose cancer isn't simply a mistake, it's a matter of life and death," Taylor said. "New Yorkers should be able to trust that their doctors and hospitals are correctly identifying the cause of their pain or illness, and if something is missed, they should be able to seek recourse. Lavern's Law will go a long way in ensuring New York's malpractice statutes are fairer to those who have been harmed."

The law is named in memory of Lavern Wilkinson, a mother who died in 2013 of a treatable form of lung cancer. The hospital she attended three years earlier failed to notify her of a suspicious mass in her chest X-ray. By the time she was diagnosed with cancer, it had spread throughout her body and the deadline to seek justice in court had already passed. Her daughter, Micalia Squires, who has a severe form of autism and requires extensive care, survives Ms. Wilkinson. The settlement agreed upon by the hospital and the city is only a fraction of what the family could have been awarded from a medical malpractice suit - vital funds that would have greatly helped the family care for Micalia. "It's unfortunately too late for Ms. Wilkinson's family to get the justice they more than deserve, but I hope they find solace in knowing that because of their advocacy, more families like theirs will be able to get their day in court," Assemblymember Taylor said.

Assemblymember Taylor voted to move the 2018 state primary election date from Tuesday, Sept. 11, to Thursday, Sept. 13, out of respect for those who lost loved ones in the terrorist attacks of Sept. 11, 2001, as well as those celebrating Rosh Hashanah (A.8917-A). Sept. 11 will forever be a day of remembrance, a time to mourn our fellow New Yorkers whose lives were taken far too soon by an unforgiveable act of terrorism," Assemblymember said. "It is also a day to honor the brave firefighters, EMTs and police officers who showed us the best of America during our darkest hours. Moving the primary election two days allows us to come together to show our respect to those who died and those who came to the rescue."

Gun-related violence and deaths have been on a rise in our country, affecting our young generation and people of color the most. Some studies have even approached gun violence as a unique public health epidemic and crisis of constitutional significance. On February 17th, Assemblywoman Richardson of the 43rd Assembly District and I will be hosting a workshop on gun violence with many specialists during the Caucus weekend in Albany. Bus services will be provided to Albany for the Caucus weekend, please see the flyer on page 5 of this report for more information. For more details regarding the event please contact our District Office.

Taylor Meets with MTA Representatives to Fight For Our Rights; Requests for Follow-Up with Chair of MTA

The Listening Tour held at the Church of Intercession was a huge success! Taylor and staff facilitated the attendance of representatives from the offices of the Public Advocate and Manhattan Borough President Gale Brewer and the officers of the 30th and 33rd Precinct. We assure you that you voice was heard and that we are working diligently to resolve all the issues that were raised!

SAVE THE DATE: The Assemblymember will be conducting Round Table discussion with constituents on February 28th, 2018 @ the Hammer Building on 701 W 168th Street, from 6:30pm – 8:30 pm. Please call the Office for further details!

Services Available at the District Office

Taylor Working to Help the Community

[Above] Taylor attending the Anti-Trump rally organized by the Haitian community in response to the discriminatory remarks made by President Trump regarding people of color at Times Square. The Assemblymember gave an inspirational speech emphasizing American values that are an attestation to the respect we owe one another regardless of color and race. [Above Left] He is seen here photographed with President of the New York State NAACP Hazel Dukes and NYPD Chief of Patrol Rodney Harrison. [Above Center] Also pictured is Taylor with Akeem Browder, brother of Kalief Browder who committed suicide post his 1000-day stay at Riker's without trial.

[Left] Taylor at Governor Cuomo's Annual New York State Marches for Women Breakfast, before he joins countless New Yorkers in marching for women and women's rights through the streets of New York City on Saturday, January 20.

[Top Row Left] Taylor speaking and receiving a standing ovation at a talk for Summer Youth Employment in Albany, encouraging the youth to hold their state and country accountable in providing ample opportunities to better their own futures. [Top Row Center] Taylor with the Black, Puerto Rican, Hispanic and Asian Caucus members discussing the Governor's Proposed Executive Budget for FY 2019. [Top Row Right] Robert Desir and Ellen Davidson from the Legal Aid Society in met with Taylor regarding legislation in Albany. [Second Row] Taylor with Carmen Quinones at the NYCHA Emergency Action Meeting on January 18, 2018. 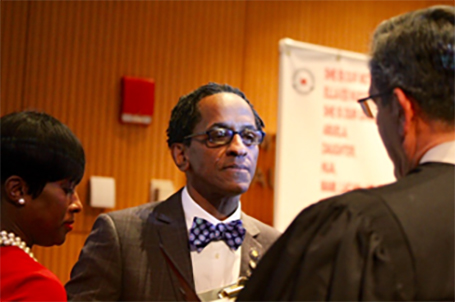 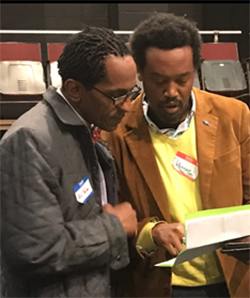 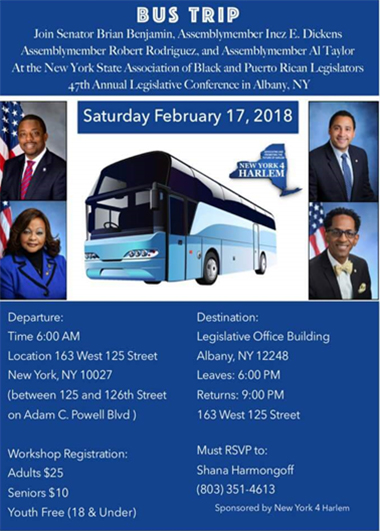