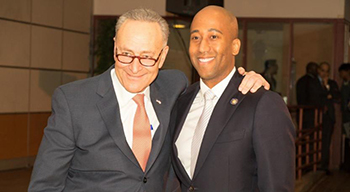 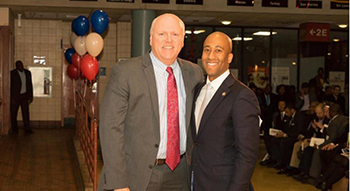 United States Congressman Joe Crowley, left, was one of the main speakers at Assemblyman Clyde Vanel’s inauguration to the New York State Assembly.
Senator Chuck Schumer, Congressman “Joe” Crowley, Congressman Greg Meeks, as well as Queens Borough President Melinda Katz, were also among the distinguished guest list of speakers. The first Haitian-American and Obama-appointed justice and U.S. Court of Appeals for the Second Circuit, the Honorable Justice Raymond Joseph Lohier Jr. performed the swearing-in ceremony, referring to Vanel as “the change we need to see.” Assemblyman Vanel began his address to his constituents by honoring Barbara Clark, her legacy, and her family for their dedication and service to the community for over 30 years. Vanel focused on bringing back family values, improving education and strengthening the economy. 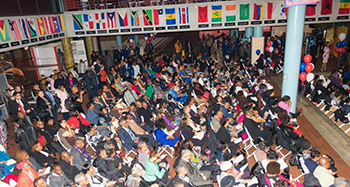 A crown of approximately 800 gathered at York College for the inauguration of Clyde Vanel to the New York State Assembly.
“We are in a state of emergency for the middle-class,” Vanel said. “The next generation cannot afford to live in the neighborhood they were raised in. We are priced out of our own neighborhoods.” He also stated that he, along with his colleagues in government, will focus on revitalizing downtown Jamaica by working on the $10-billion JFK Airport improvements